How to repel pigeon and bird?

Eatern Universe Pigeon Repellent Gel (Suitable for bird) is one of top bird repellent solution for Pigeon in Malaysia. It's the best solution to repel Pigeon in your balcony and house.

Advanced Bat/Bird Repeller is one of best repeller, with variable ultrasonic sounds to repel bird/bat. Over years, this product become popular in Malaysia market.

We had almost zero failure rate to repel bat at this moment. I would strongly recommend this product for anyone with bat issue on balgony.

Fipronil is a broad use insecticide that belongs to the phenylpyrazole chemical family. Fipronil is used to control ants, beetles, cockroaches, fleas, ticks, termites, mole crickets, thrips, rootworms, weevils, and other insects. Fipronil is a white powder with a moldy odor. Fipronil was first registered for use in the United States in 1996.

What are some products that contain fipronil?

Fipronil is used in a wide variety of pesticide products, including granular products for grass, gel baits, spot-on pet care products, liquid termite control products, and products for agriculture. There are more than 50 registered products that contain fipronil.

Always follow label instructions and take steps to avoid exposure. If any exposures occur, be sure to follow the First Aid instructions on the product label carefully. For additional treatment advice, contact the Poison Control Center at 1-800-222-1222. If you wish to discuss a pesticide problem, please call 1-800-858-7378.

How does fipronil work?

Fipronil kills insects when they eat it or come in contact with it. Fipronil works by disrupting the normal function of the central nervous system in insects. Fipronil is more toxic to insects than people and pets because it is more likely to bind to insect nerve endings. 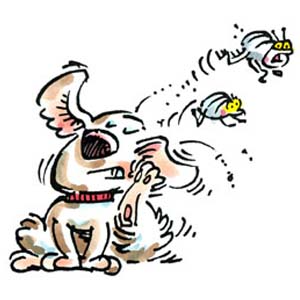 People can be exposed to chemicals in four ways: contacting their skin, contacting their eyes, breathing them in, or eating them. Direct contact to the skin or eyes may occur while applying fipronil products. Pets may be exposed to fipronil by products that are applied to their skin for flea and tick treatments. People may also be exposed to fipronil when applying flea and tick products. It may also be possible to swallow fipronil if the hands are not washed following skin exposure. Exposure to fipronil can be limited by reading the pesticide label and following all of the directions.

What are some signs and symptoms from a brief exposure to fipronil?

Health effects from a brief exposure to fipronil depend on how someone is exposed to the chemical. Direct, short-term contact with skin can result in slight skin irritation. When individuals have eaten fipronil, reported health effects included sweating, nausea, vomiting, headache, stomach pain, dizziness, weakness, and seizures. Signs and symptoms from a brief exposure to fipronil generally improve and clear up without treatment. 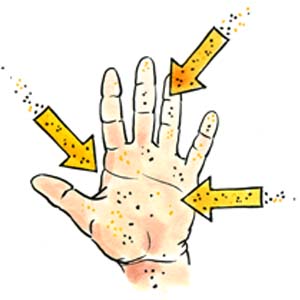 What happens to fipronil when it enters the body?

The amount of fipronil taken into the body across the skin depends on the product formulation. Researchers applied a dose of 79% fipronil to the skin of rats and found that less than 1% of fipronil was taken into the body after 24 hours. When test animals have eaten fipronil, between 15 and 33% (goats) and 30 to 50% (rats) of the ingested dose was absorbed by the body. The rest of the fipronil was eliminated in the feces and urine.

Once in the body, fipronil is found mainly in the fatty tissue, and breaks down into smaller chemicals called metabolites. Fipronil and its metabolites are then removed from the body mostly through the feces and also in the urine.

Is fipronil likely to contribute to the development of cancer?

Scientists have not found any evidence of fipronil causing cancer in humans. Researchers fed fipronil to rats in their diet for nearly two years to find out if fipronil can cause cancer. Researchers found thyroid tumors in both male and female rats fed the highest dose. While these findings are considered to apply only to rats, fipronil is classified as a "possible human carcinogen" by the United States Environmental Protection Agency (U.S. EPA).

Has anyone studied non-cancer effects from long-term exposure to fipronil?

Studies have been done to find out the possible effects from long-term exposure to fipronil. In one study, scientists fed fipronil to rats for a year and found an increase in seizures and death among test animals. Fipronil was also found to decrease thyroid hormone levels among rats. However, most short-term and long-term studies find that fipronil does not affect the endocrine system, the system responsible for regulating hormones in the body.

In another study, scientists found that long-term exposure to fipronil in the diet can affect the ability of rats to produce offspring. Effects in those rats included: less mating, reduced fertility, smaller litter size, and increased loss of pregnancy. Scientists also found decreased survival and delayed development among offspring.

Are children more sensitive to fipronil than adults?

While children may be especially sensitive to pesticides compared to adults, there are currently no data showing that children have increased sensitivity specifically to fipronil. 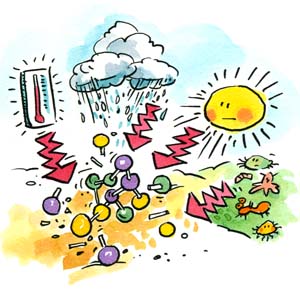 What happens to fipronil in the environment?

In the soil, naturally occurring organisms break down fipronil into smaller chemicals, and on the soil surface, fipronil is broken down by sunlight. Fipronil breaks down in the soil so that half of the original amount is gone in about 125 days. This break down time is called the "half-life" of the pesticide. Fipronil sticks tightly to soil and does not mix very well with water. Therefore, it does not move much in the soil and is not expected to get into groundwater.

Fipronil reacts with water to break down into smaller chemicals at a speed that increases as the water becomes less acidic. When fipronil in the water is exposed to sunlight it breaks down rapidly with a half-life of 4-12 hours. Fipronil and its breakdown products can build up in water under normal conditions.

There is no evidence that fipronil or its breakdown products evaporate from soil or water into the air. Fipronil is not well absorbed by plants when it is applied to soil. If fipronil does get into plants, it can partially break down. On plant surfaces, fipronil can be broken down by sunlight.

Can fipronil affect birds, fish, or other wildlife?

Why spend thousand dollar to hire professional if you can fix it at your own with four steps by using Termites DIY Elimination Box (Cost : RM69 only)

Termites Colony Elimination Box is one of our top selling product in Malaysia. There're many sellers in Malaysia but we provides the best price.

We're officially launch our online store in 22 December 2014. Thanks for all supports from our Malaysian Customers.